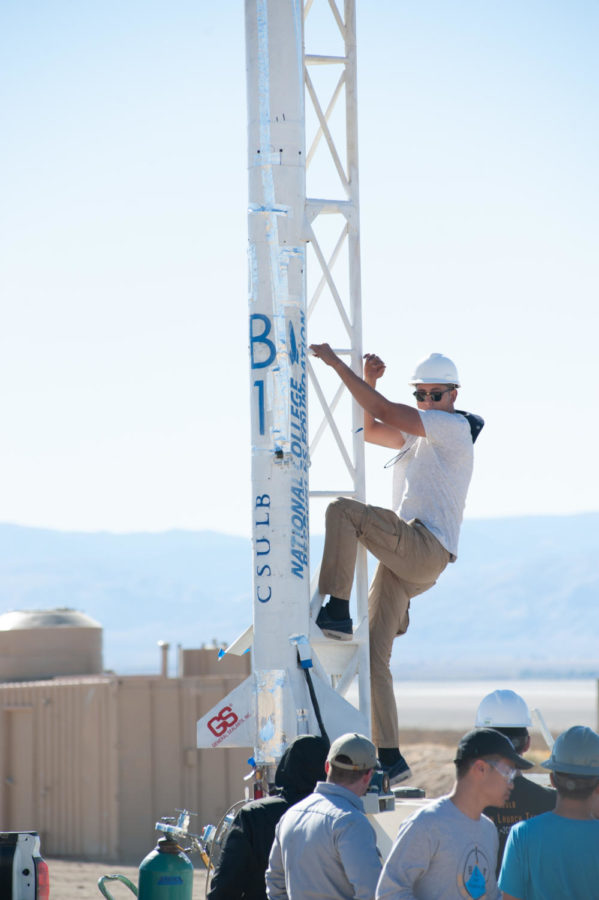 A successful lift off has prompted the Beach Launch team to construct a new and improved liquid propelled rocket named “Beach 2 ‘Karmen,’” while preparing for three engineering and aerospace competitions in 2019.

The club has launched two rockets since becoming a student operated entity, including its first ever liquid propelled rocket, Beach 1, that was launched Jan. 5, 2019 after two failed previous attempts.

“The best part about launching Beach 1 was just watching it go up in the sky,” said Andrey Ruf, aerospace engineering major and BLT chief engineering officer. “We’ve been trying to get this rocket off the ground for almost a year now, so we were all very much like, ‘This needs to happen because we needed a win for the team.”

The launch team manufactured and perfected Beach 1 in hopes of competing with other colleges in the 2018 Friends of Amateur Rocketry competition.

Once the team realized its rocket would not be flight-ready by the May 2018 contest deadline, BLT pulled out of the competition along with postponing Beach 1’s original launch date.

“Everyone but one school, the University of California, Los Angeles, decided to go through, and their rocket exploded,” Ruf said.
When July rolled around, BLT traveled to the Mojave Desert ready to launch Beach 1. However, high summer temperatures caused the rocket’s computer to malfunction which delayed the launch.

The team returned to the desert in October for yet another attempt to get Beach 1 off the ground. Once again, they were unsuccessful due to a 60-foot launch rail breaking in half delaying the team.

Twenty-five BLT club members returned to the Mojave Desert for a third time at the start of the new year eager to launch and say goodbye to Beach 1 forever. The team launched its rocket to a maximum altitude of 6,000 feet on Jan. 5.

“[For] some of us, it [was] our first time watching a student organization launch a rocket,” said Sean Won, the BLT project manager. “Clearly seeing that we can build a powerful rocket motivates members to work harder for the next rocket.”

The goal for the Beach 1 launch was to reach an altitude of 45,000 feet. BLT missed this by 39,000 feet. While celebrating a win for the team and a successful launch, they are working on achieving a new goal, the improved Beach 2 rocket project.

“We’re doing more trade studies, testing and research to make sure we are getting as efficient as possible,” Ruf said.

The club is looking forward to developing their Beach 2 rocket over the next two years.