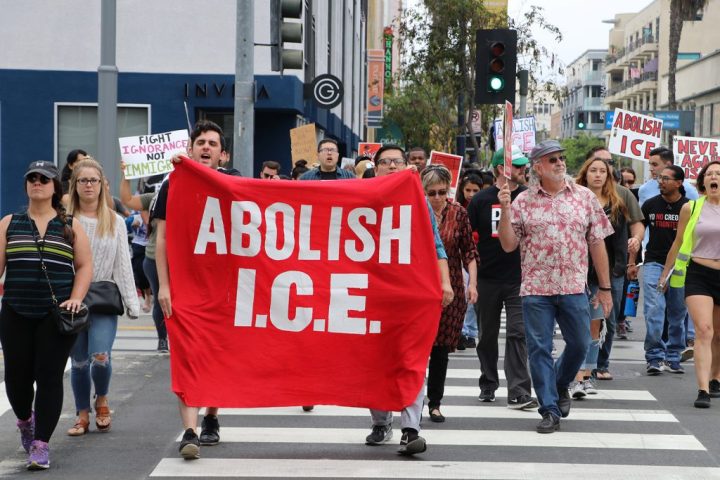 Nearly 250 people gathered at Harvey Milk Park in Long Beach on Saturday and marched to the local Immigration and Customs Enforcement (ICE) office while chanting, “Education not deportation.”

The demonstration was part of nationwide ”close the camp” protests against the treatment of immigrant children at federal deportation facilities. Similar street activism was held in Huntington Beach,  Los Angeles and other locations throughout the United States.

Gabby Hernandez, an organizer with the Long Beach Immigration Rights Coalition, started a speech in English. She spoke of inclusion and the unjustness of ICE raids and offered to help anyone who needed it, which was an act of braveness considering she is an undocumented immigrant herself.

Finishing in English, Hernandez switched to Spanish just as a woman in yellow pants screamed, “You never helped me when I was homeless! How do you think I feel?” The woman, who had a small dog in tow, then rushed toward the stage, aggressively approaching Hernandez before she was ultimately stopped by other organizers near the front of the stage with the same aggressiveness.

Hernandez continued reading in Spanish as the woman kept screaming, cussing and demanding that the speaker exit the stage. But Hernandez continued to show her courage and support, raising her voice while yelling into a megaphone to speak over the upset woman, who was determined to voice her opinions to the activists.

“Our communities should not be afraid to go to work or to take their children to school and to live an ordinary life,” said Hernandez. “People’s livelihoods are at risk. We cannot continue to have families be separated anymore, not today and not ever.”

The half-mile-long march included a mass of protestors with signs in hand. They passed several federal buildings, the police department and the Long Beach City Council chambers on their way to the Long Beach ICE office.

Despite the discourse at the park, the rally was mostly peaceful. Everyone was there to support a bigger cause, immigration.

This is despite the Long Beach Values Act that the city council approved in March. It puts Long Beach in the running to be a sanctuary city and prevents the police department from working with federal immigration officials. One thing the act does not do is protect undocumented people who break the law.

As the march passed the police station on Atlantic Boulevard, activists shouted, “LBPD, what’s your price?” Police officers stared out the large windows as the hundreds of people with signs chanted and walked by.

“The police chief wants to continue collaborating and working with other law enforcement agencies and doesn’t understand that all immigrants are part of this community,” explained event organizer James Juazo of the Democratic Socialists of America in Long Beach.

When passing the council chambers, protestors chanted, “Robert, Robert what’s your price?”–a reference to Long Beach Mayor Robert Garcia. Many people say they are angered that the city’s first Latino mayor has been unwilling to protect all immigrants.

Once at the Glenn M. Anderson Federal Building on West Ocean Boulevard, where the immigration office is located, the chanting stopped as everyone congregated around the front of the building to hear speeches from those affected by the Trump administration’s ICE sweeps.

Among the speakers was a refugee from Honduras who was placed into a camp for eight months after immigrating. Alexander Burger told his story of the unjust living conditions he experienced and about the hunger strike he and his friends in the camp did in protest.

He explained in Spanish that he just wanted to be accepted in Long Beach and not be afraid of any more immigration raids.

“We as immigrants cannot do this alone,” Burger said. “We need to unite and fight the injustice; we need to protect our brothers and sisters who are being discriminated against and incarcerated.”

As the group made its way back to the park while still chanting in hopes of making a change, they continually received honks of support from many people driving by.

“Horrible conditions are occurring in the camps and we have to stand up and get involved,” said Long Beach resident Ben Hauck. “We need to protect the people in our communities; we need to stand for immigrants and I just really want to be a part of it and show solidarity with the community.”

Once at the park and throughout the entirety of the event, organizers motivated activists to get involved by training to become observers or dispatchers to help raise awareness about upcoming ICE raids. Members asked those who were bilingual and interested to sign up with the Long Beach Community Defense Network.

Although the chants were directed toward the city council and the LBPD, the Democratic Socialist Party members who organized the event felt that change does not start with them, it  starts solely with the community.

“I think the change starts with the community and the more the community in Long Beach knows about what’s going on and how our city leaders are treating this issue, that puts pressure on them,” Juazo said.